After months of preparation on 3rd January we were finally ready to leave home. With the taxi booked for 4.30 (allowing us just enough time to watch Brighton beat Everton first!) we had a short journey to Brize Norton followed by a long flight to the Falkland Islands.

We got to Brize Norton ok and checked in all our luggage (we had a lot!). About an hour before boarding we got the message that our flight would be delayed for 24 hours! We were told that we would be put up for free at Gateway House at Brize Norton. I only had my hand luggage with me - most people had washbags and overnight stuff in their hand luggage - my hand luggage however was basically camera gear. Not the best for an overnight stay on a hotel! Fortunately there was a shop selling toothpaste and a toothbrush so I had the essentials!

Staying at Brize Norton was stange. We were not allowed to walk anywhere and had to stay in our rooms except for at meal times when we were escorted to the mess hall. The food was good but with no tv or wi fi and stuck in a basic room it was quite dull. Fortunately I had my laptop and thousands of unedited photos from Spain to sort so I cracked on with that (nearly done now). Around 4pm on the 4th we were told (or rather found out from rumours   - we were not told very much!) that our flight had been postponed for another 24 hours. Apart from the fact that my feet were now starting to get rather smelly having been unable to change socks for a couple of days this presented another problem. Our PCR test that we had on 31st Dec would run out at 11am on 5th Jan. If the flight was delayed again we would have to somehow need to travel to get another PCR test. It would also need to be a same day test. The only test centre near to Brize Norton was charging £350 for same day tests! We decided not to spend £700 "just in case" so kept our fingers crossed!!

Fortunately the next day our flight did leave ok and we were finally on our way to the Falkland Islands - just 55 hours after leaving home! The flight was long and as I cannot sleep on planes exhausting. On arrival in the Falkland Islands we were driven to our new home where we are now quarantining. I'm using the time to finish my photo editing from Spain and looking forward to getting out and exploring in a few days time.

No photos yet as I obviously haven't been out with my camera yet. Only picture I have is of our new home :) 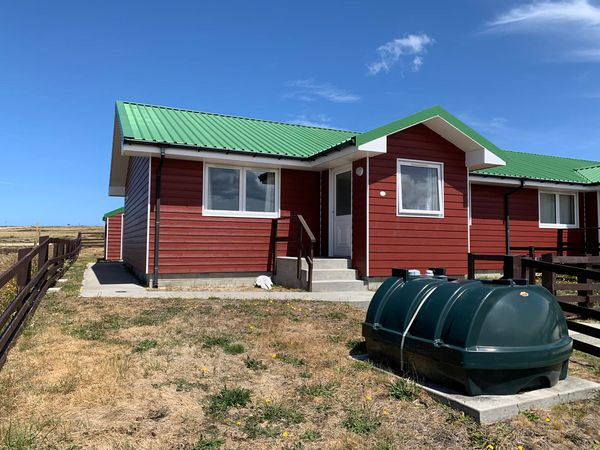 Natalie Lee(non-registered)
So glad that you’ve arrived safely. Sorry you had such a rubbish time at Gateway House. I didn’t realise you were stuck there or I would have come and got you! I hope your quarantine passes quickly and that you soon get out with your camera. Can’t wait to see some photos!
Mum(non-registered)
Very interesting.
No comments posted.
Loading...
Subscribe
RSS
Recent Posts
Falkland Islands - The Journey Azores Pelagic
Keywords
Atlantic Spotted Dolphin Bottlenose Whale Bullwer's Petrel Cetaceans Cory's Shearwater Dolphins Pelagic Seabirds Whales
Archive
January February March April May June July August September October November December
© Glenn Welch Photography
User Agreement
Cancel
Continue